A day of wine and water, but mostly wine

15st 1lb, 10.8 units (I only did it for The Baby). After a night in which sleep battled against chronic indigestion, and the indigestion won as it always does, we rose to the bright, crisp morning of The Baby’s christening. Thanks to our chronic indecision in John Lewis a week ago, he had a choice of two ultra-cute outfits: one a traditional silk affair and the other a sailor suit with matching hat. However, Mrs H decreed that he would not be wearing either of the above until the start of the actual christening service, because of the near certainty of some unfortunate mishap as soon as he was smartly attired.

We had arranged a private christening at 11.30, but told all our guests that we would be attending the usual 10 o’clock Holy Communion and that they would be most welcome to join us then. Strangely enough, no-one took the hint apart from Mrs H’s parents and uncles, who are not exactly dedicated members of the C of E, and my goddaughter from Liverpool. I was quite impressed by the latter until it turned out that she had only made it because she had forgotten to put her clock back.

The Baby duly confirmed the wisdom of his mother’s dress policy by creating a certain amount of mess while being fed before the service.

“There’s a whole row of them sitting right behind you,” I replied unhelpfully, gesturing towards her family.

My, how we laughed.

As usual, we defied the instructions of the Archbishops and shared the communion chalice, which really was an act of faith given that the vicar, who had first dibs, was doing a strikingly convincing impression of having swine flu, though he blamed it on an adverse reaction to his vaccination against it yesterday.

Perhaps illness affected his judgement as when we got to the “Sign of Peace” bit in the service, which he normally skips over, we were all invited to participate. My aunt raised her eyebrows significantly.

When the service was over, the congregation made short work of the homemade chocolate brownies Mrs H had brought with her to accompany the sacred rite of coffee, and also demolished the remains of our wedding cake. As they started to drift off, our other guests began to drift in. With the notable exception of the godparent who had come furthest for the occasion, whose yellow Porsche finally drifted into the church car park about ten minutes after our scheduled kick-off. He claimed, plausibly, to have been caught out by the “A51 Closed Weekends: Follow Diversion Not Sat Nav” signage, though his partner revealed that he had also viewed the christening invitation as he would that to any other sort of party, and assumed that it would be deeply unfashionable to turn up at the time specified on the card. 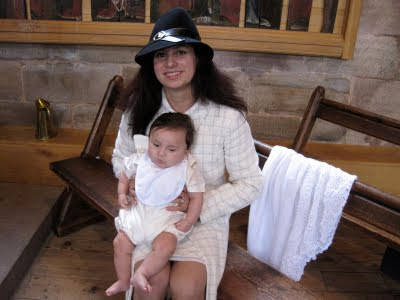 The Baby limbering up for the Big Splash

We kicked off eventually with a Book of Common Prayer service that not even the vicar had ever used before, but which I found vastly more interesting than the modern alternative. It is not yet up there with the 1662 wedding and funeral services as one that I can just about recite from memory, but certain phrases echoed comfortingly down the ages, including “Ask, and ye shall have; seek, and ye shall find; knock, and it shall be opened unto you” and “Suffer the little children to come unto me.”

And who could resist witnessing a couple of multi-millionaires promising to “renounce the devil and all his works, the vain pomp and glory of the world, with all covetous desires of the same”?

The first time I went to a christening as a godparent, I remember writing rather preciously in my diary afterwards that seeing the vicar make the sign of the cross on the baby’s forehead reminded me of nothing so much as a woodman marking a tree for felling. I had no such sense at The Baby’s christening; just joy that he was the focus of so much love and happiness; that he got through the ceremony without crying; and that the vicar’s mild dose of swine flu prevented him from noticing the whiff from the bundle in his arms, who with perfect timing had noisily filled his nappy a few seconds before he was handed over. 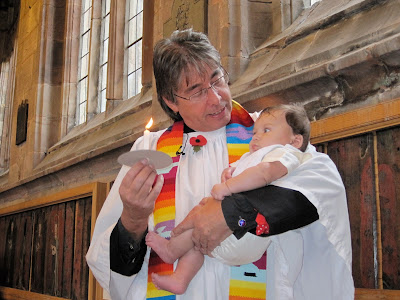 The Baby sees The Light 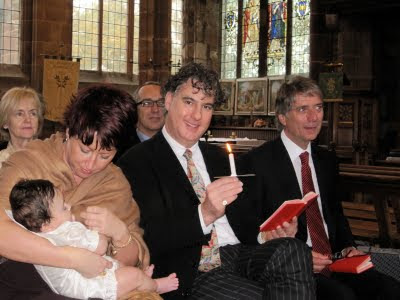 Godparents wondering "What have I done?" 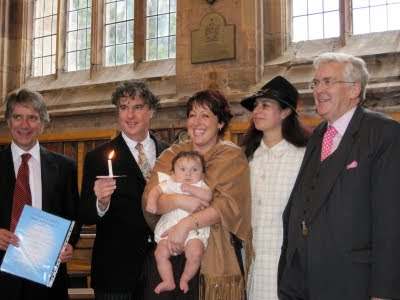 The Baby and his newly extended family

Afterwards we all drove to a pub and had a Sunday roast, preceded by champagne and accompanied by rather a lot of Zinfandel, telling ourselves that it is what The Baby would have wanted. I regret to say that I gave a short address (No 1, London), which went pretty much like this:

The bad news is that I have spent all week working on a speech.

The good news is that it wasn’t this one.

It was Mrs H who suggested that I should “say a few words”. As you might expect, given that Mrs H has been the driving force and organizational genius behind this whole event – and therefore the person to whom any comments or complaints should be directed.

Her leading role is actually a bit odd, when you think about it, considering our respective religious backgrounds.

Someone genuinely did ask, when we first mentioned this date, whether we were having a Muslim christening or a Christian one?

Worryingly, they weren’t trying to be funny.

Resisting the temptation – which is unusual for me – to ask what exactly they thought that the derivation of the word “christening” might be, I just said “It’s being done by Rick, the very nice man who married us.”

Followed by, on reflection, “I mean it will be the best of both worlds!”

Well, I am sorry that we did not manage to introduce any exciting elements of tension this morning, like Mrs H being asked whether she wanted to marry me three times, but it was certainly exactly what I wanted, and The Baby’s too young to have a view, so that’s clearly what matters.

Thank you, Rick, for being as ever so willing to accommodate any request, however eccentric.

And thank you all for being here to support The Baby on this important day, and particular thanks to all our wonderful godparents. We were surprised and delighted that you all agreed to take on these onerous responsibilities with such alacrity.

There were a number of other candidates we had in mind, and when Mrs H mentioned one of them to me I pointed out that the Church of England merely suggests three godparents as a minimum, and there was nothing to stop The Baby having more of them.

“Oh no,” she said disarmingly, “We need to keep some in reserve for the next one!”

I pointed out that he was only ever going to have the one christening, and she explained that she meant the next baby.

Sorry, I should make it clear that I am referring to a hypothetical next baby there, not making an important announcement.

Anyway, this is The Baby’s day and The Baby is still quite short, so I guess I should be, too.

You will all be familiar, I am sure, with the story of the beautiful young woman who approached George Bernard Shaw and suggested that he should father a child with her, as the combination of her looks and his brain would be absolutely stunning.

“Yes,” he replied. “But what if it has my looks and YOUR brain.”

The Baby has been fortunate, you will have noted, in inheriting his mother’s looks. And, though I recognize that I may be biased, he is the most handsome baby I have ever seen.

In the interests of total honesty, I should perhaps add that this may also reflect the fact that I have never taken any great interest in babies before.

(Except in you, obviously, darling goddaughter.)

It is too early to say how he will turn out in terms of intelligence. At present he is still behind The Dog and The Cat in the Hann family league table, but it is early days.

What I can say with certainty is that he has inherited a huge number of my characteristics, including periodic grumpiness and an intense suspicion of anything or anyone new – unless, curiously enough, the someone new happens to be an attractive blonde lady.

We are doing our utmost to iron out these inherited quirks and make him a far better man than his father. Which won’t be difficult, I know.

For example, I started swimming lessons at the age of eight and kept them up for eight years, at the end of which I still could not swim a stroke – as remains the case today.

We are also trying to make him comfortable in social situations – something I have never mastered. With the exception of a five day stay in hospital to have my tonsils out when I was five or six, I can honestly say that I don’t think I ever spent a night apart from my parents until I was 17 and went for an interview at Cambridge.

The Baby has been staying with his lovely grandparents on a regular basis since he was six weeks’ old, and the only problem we ever encounter is persuading them to let us have him back.

As for the godparents, all I can say is that you won’t need to do much to improve on the contribution of my godparents to my life, which could neatly summarized in two words, one of which is “all”.

(Marion, feel free to have a word with them afterwards and tell them how it should be done.)

I’m probably rambling now, so let me just thank you all again for being here, adding the rider that I am now being sincere even though it is my cross always to sound sarcastic.

Now let’s have a little toast to put an end to this.

I’ve no idea what one is supposed to say on these occasions, so I’ll probably get this hopelessly wrong, but my instinct is that we should raise a glass to The Baby and wish him long life, good health and much happiness.

And I can report that it has worked admirably so far. 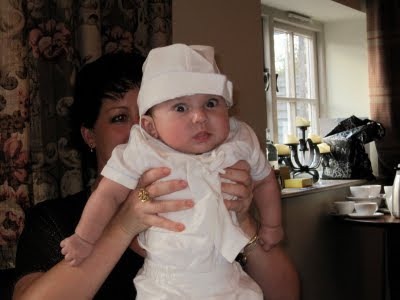