A bit wobbly in the saddle

Blogging, it seems to me, is a bit like riding a bike. Or sex. Do it regularly and it seems totally natural and easy. Have a break, say after a nasty accident (a tumble over the handlebars into the hedgerow, or a sharp kick in the bollocks administered by that young lady whose signals you misread) and taking it up again becomes rather a mountain to climb. Over the weeks since my last entry, said mountain has gradually increased in size from a large hill around the height of Cheviot, via Ben Nevis and Mont Blanc, to something now roughly on the scale of K2.

So it can’t get much worse, at any rate.

But I feel that I really must make an effort to break my silence and get back in the saddle now, or there is a good chance that I never will. I am still a bit wobbly, and I’m afraid we’re going to have to dispense with a few niceties like checking the tyre pressures or foreplay (so no change there, I can sense Mrs H mouthing) but here goes:

It’s lovely to be back.

I’ve not been well, but I ran into The Baronet in London’s Ludgate Hill yesterday, after a rather fine lunch in Fleet Street provided by my bank (I wonder who will ultimately end up paying for that?) and he assured me that I was looking much better than when he last saw me at the Alwinton Show a couple of weeks ago. The Baronet, I should perhaps explain, is the bloke from Essex who thought he was buying my lovely house in Northumberland, until Mrs H and I went up there last month to start clearing it out and I got so ill that I could not raise a finger, and felt obliged to call the whole thing off.

His statement that I looked a lot better at least suggested the possibility that I had looked reasonably ill when our paths last crossed. Which in turn might have meant that he accepted that there was a genuine reason for my change of heart, rather than merely a tendency to dither and generally dick people around, in the style made famous by our much-loved Prime Minister.

I found this strangely comforting. I never like to think that my behaviour might be confused with that of Gordon Brown.

The Baronet reiterated how keen he was to buy my house, and I promised to think about it. I explained that I was still waiting for a letter from my friendly local NHS hospital to tell me whether I was dying or not, based on the results of some tests I had done shortly before I left the North East. He said that he was not a doctor, but I could take his word for it that death was not imminent. For a second or two I wished for a piece of space debris to strike me down, just so that I could expire with the word “Ha!” on my lips.

Since The Baronet is an English gentleman of the finest sort, he almost certainly means it when he says that he still wants the transaction to proceed. Though I am conscious that, if I were the buyer rather than the seller in similar circumstances, I might well sweet talk the vendor into going to a lot of trouble clearing out his house just so I could have the pleasure of pulling out at the last moment, saying as I did so “Now you know what it feels like. Disappointing, isn’t it?”

Anyway, where was I before I was so rudely interrupted? Oh yes, shrews in south Cheshire. We haven’t seen one since, so perhaps The Cat accounted for all of them. I can only hope that they weren’t an unusual variety that had been specially reintroduced to our garden by the South Cheshire and North Shropshire Rare Breeds Survival Trust.

Consulting my diary to find out what the hell happened after that, I see that The Dog injured himself by jumping off our bed, then we went to a Wedding, which was nice. Shortly after which – and, in case our hosts at the Wedding should happen to read this, I should stress that I am sure that the sequence of events was completely coincidental – I began to feel distinctly unwell. 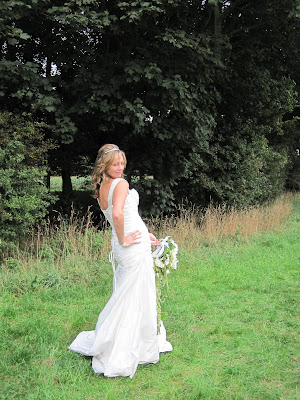 A classic wedding portrait, with no nonsense about a groom 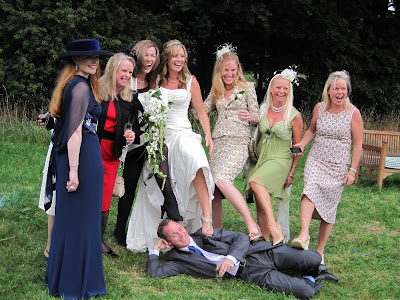 Not the groom, either
First I went to see Mrs H’s doctor in Cheshire, who recommended that I take my chest pains to the nearest A&E Department without further delay and have them checked out. Instead I drove the 235 miles to Northumberland and went to see my own GP the next afternoon, where an ECG was run that apparently showed nothing untoward. A few days later the chest pains recurred, fortissimo, and this time I took my own doctor’s advice and went to A&E. Slowly and reluctantly, of course, but go I did.

An encouragingly pretty doctor ran another ECG on which she said she could detect tell-tale signs of a heart attack, but not signs big enough to interest the region’s specialist heart hospital when she faxed the trace through to them. Nevertheless, she recommended that I remain in hospital (a) because if I went home and dropped dead it would be marked down as her fault, and (b) because she wanted me to have some further tests which could be arranged much more quickly if I was actually on the premises.

So I spent a night in a bed in the Medical Admissions Unit. The bed furthest from the door, which is always encouraging, though not a place I could conscientiously recommend to anyone in need of a good night’s sleep, as former miners with breathing difficulties continued to be admitted and “processed” into the early hours. I was relieved when another ward took the huge, tattooed man who had been sitting brooding by the door, complaining at steadily increasing volume about the lack of his nightly diazepam and temazepam; without which, he warned, he was highly likely to have a “funny turn”, the probable consequences of which struck me as almost certainly less than hilarious. But I still enjoyed the company in the next bed of an elderly lunatic from the local asylum, who spent his time coughing and retching loudly in those short intervals in which he could be coaxed between the sheets, rather than shuffling around the ward gawping at his fellow patients.

They let me go home the next afternoon. No further tests were carried out, though they did summon me back by letter to have them done about ten days later. I mentioned this to the lady conducting the first test, who assured me that there was absolutely no waiting list for it, and the only reason it would not have been done while I was actually in the hospital was that no-one had bothered to pick up the phone and request it.

After that there was the Alwinton Show, for which see http://www.keithhann-whyohwhy.com/2009/10/changing-times-in-alwinton-and-brussels.html. Luckily I took the succession of people who admired The Baby in his sling, and addressed me as “Granddad”, as a sort of compliment. The Dog was beside himself with delight at the terrier racing, in which we refused to allow him to participate on the grounds that he was still recovering from an injured shoulder (though the real reason was that neither Mrs H nor I could face the hassle of trying to recapture him at the end of the race). 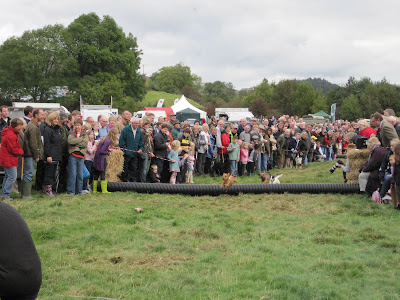 A Border terrier not in the lead, as usual
We finally made it back to Cheshire the following Monday and I have spent the last 10 days or so steadily recuperating. I even managed to drive to London and Brighton at the weekend for an afternoon at the opera at Glyndebourne. So things are clearly on an improving trend.

Meanwhile The Baby continues to grow, and to smile and chuckle rather appealingly.

Who could ask for more? 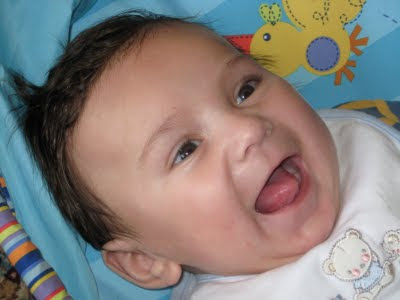 A happy baby: wouldn't you like him to advertise YOUR product?