This morning started agreeably enough, with me writing in my conservatory while the Less Tall Cheshire Brunette slaved away over a hot stove in the kitchen. Then I was despatched in the car to identify a suitable six mile route she could cover as part of her preparations for the Great North Run. I soon found one which was about the right length and inspiringly scenic, though as I neared the end it occurred to me that it seemed to be almost entirely uphill, like the endless staircase in that optical illusion much favoured as a space filler in the comics of my childhood. So I came up with a brainwave: she could run it the other way around. The LTCB looked at me blankly and asked how the hell I expected her to run six miles backwards, but with the aid of a map and some diagrams I was soon able to put her mind at rest.

So we set off in brilliant sunshine with me in front on my electrically assisted bicycle, instructed to set the pace at a steady 6mph and to shout out gleefully every time that my odometer said that we had covered a mile. I also offered to yell “Faster, you bitch!” from time to time in an encouraging sort of way, while accelerating out of reach of her fists, but this proposal was surprisingly rejected. She was pleased to have covered the required six miles in 58 minutes, and I did my best to gloss over the fact that either my car or my bike is recording mileage incorrectly, since the former made the total distance around the circuit to be 6.7 miles, while the bike claimed it was 7.1. I think my money would be on the car, to be honest, if I were the betting type.

The people we had originally invited to supper tonight rang in the course of the run to say that one of them was ill and that they might not be able to make it. Which was a bit irritating; but not as irritating as it would have been if they had not previously persuaded me to “go with the flow” and invite another couple who said that they could only come if they brought a further two house guests along with them. Making, as those of you with Grade A GCSE Maths will instantly have spotted, a total of eight compared with the six who can sit comfortably around my dining table.

Isn’t it nice when things work out for the best? And isn’t it a shame that it doesn’t happen more often? Though of course it only worked out for the best for the six of us sitting happily around the table eating a sensational meal with the added bonus of a splendid lack of rigour in the matter of portion control. It was rather bad luck on the sick bloke and the lady who kindly stayed at home to look after him. 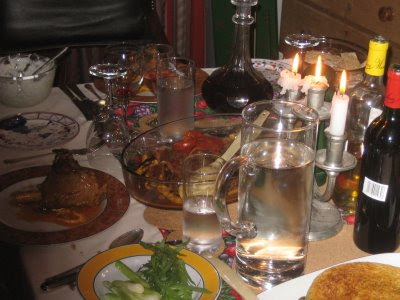 The groaning board: would even a groaning bawd have been more fun?
To accompany the LTCB’s brilliant Iranian cooking I had dug out a wide range of Lebanese wine, representing the nearest geographical fit; the Persian wines of Shiraz which once won such acclaim having long since been eradicated and the vineyards turned over to the production of table grapes and raisins. The Chateau Musar white was pronounced drinkable and interesting, though I noticed that no-one rushed to claim a refill, while the rosé was universally condemned as utterly revolting, and I ended up emptying their glasses down the sink. Luckily I received a much more positive response to the 1985 red, which had been maturing nicely in a shed for some 18 years. We drank the very last two bottles from what had once been a huge stash of the stuff. As I savoured the final drops, I felt as though I were losing an old and dear friend, though luckily I have ample supplies of the 1993, 1995 and 1997 vintages which may become almost as delicious in their turn. I am by no means as well supplied with young friends to replace those currently nearing the edges of their perches.

The wine’s high alcoholic content was evident, too, in the sort of helpful remarks that our guests started lobbing into the conversation, like “So when are you two going to have a baby, then?” It’s such a waste when a really fine wine ends up going up your nose. When talk turned to the hilarious e-mail I had sent vividly describing my first meeting with the LTCB, accompanied by a threat to forward it to her, I found myself yawning uncontrollably and saying “Good Lord, is that the time?” It seemed prudent to lose this dear friend, albeit temporarily, before he started the LTCB thinking yet again, “What am I doing here?”

Particularly now I know just how well she can cook, on top of her many other virtues. Not to mention, particularly in this blog, some really rather appealing vices.