14st 0lb (quite a result after all those bars of chocolate yesterday); 7.0 units of alcohol, mostly in the Curmudgeons’ Arms at lunchtime; 1,261 days to go; Alnwick and Newton-by-the-Sea.

The dog was seriously cheesed off with us by the time we got home last night, performing the classic Border terrier trick of turning his back on us to demonstrate his displeasure. Sadly for him I was unable to work out whether he was fed up because (a) he resented being made to travel to Chester and back, or (b) he much preferred Chester to Northumberland and wanted to stay there, or (c) he thought we were having more fun in the front of the car and disliked being stuck on his own in the back. Fortunately I was able to win back his attention and affections with the lime green squeaky rugby ball on which I had spent a massive £2.99 at the shop attached to the cattery yesterday. If only all one’s difficulties in human relationships could be resolved so quickly and inexpensively.

We spent much of the morning shopping, and discovered that broad beans (fresh, tinned or frozen) were unobtainable in Alnwick either for love or money, not that we actually offered love. Then we drove back home and had a really delicious lunch of ham and stilton quiche from an Alnwick delicatessen, with artichokes, rocket and tomato, followed by always excellent Doddington cheese. We delivered the local paper to my next door neighbours and had a lively conversation with them, of which the LTCB later confessed that she had not understood a word. She just kept nodding and smiling, inwardly rigid with fear that they were relating some terrible personal tragedy, over and above the one represented by their ill-fitting new teeth. 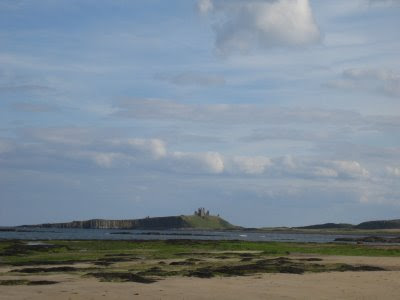 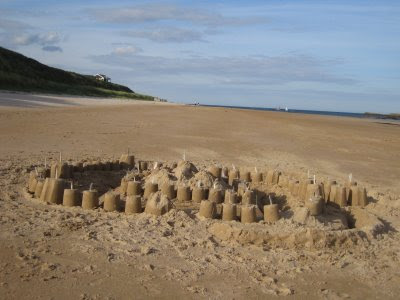 Then we drove to Newton-by-the-Sea and took the dog for what was supposed to be a brisk walk along the beach, but which rapidly deteriorated into a tediously prolonged game of chucking the lime green squeaky rugby ball and trying to get it back off him. He had pretty much disabled the squeak within 100 yards. However, I was modestly impressed by his intelligence in taking the thing and dropping it into the sea to wash the sand off it. 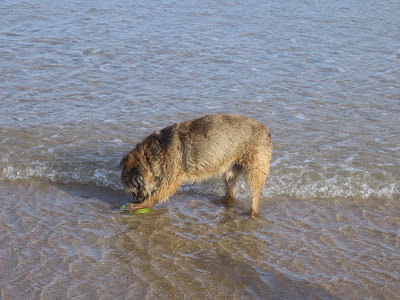 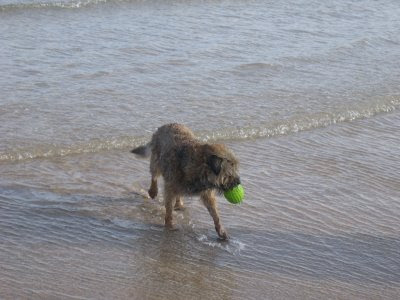 ... a Border terrier shows signs of what might be intelligence

I ended the day with a glass of Alnwick IPA, followed by melt-in-the-mouth fillet steak with steamed broccoli and a bottle of a 2000 Shiraz an Australian friend had brought back from a trip home a few years ago, and advised me to save for a special occasion. For most of my life I was very good at putting things aside for such events, and very bad at recognizing when they had actually arrived. Perhaps it is a northern trait. A friend movingly describes taking a bottle of champagne to his grandparents in Stockton-on-Tees on their diamond wedding anniversary, knowing that they had never tasted it in their lives. They duly insisted on putting the bottle aside for a special occasion, despite my friend’s assertion that few things were likely to cap a marriage lasting for 60 years, and it was found, covered in dust, among their effects when they both died a couple of years later. I am glad that I have finally learned to adopt an alternative approach. Carpe diem, as so very few people say these days, at any rate in the course of casual conversations in Northumberland.
Posted by Keith Hann at 18:44:00