You are old, Father William

To each of us who is fortunate enough to live long enough, there comes a point when we must reluctantly recognise that we are old.

It is usually quite sudden. I can remember it happening to my father when he was taking my pet Sheltie for a walk around the block in Longbenton in the 1960s. Some lads paused their kickabout, saying “Let’s wait until this old bloke has gone past.” Dad looked around for the old bloke, only to realise that he was it. I suppose he would have been in his late 50s at the time. He came home thoroughly dispirited. I can remember laughing at him.

For me, it happened on the afternoon of Wednesday, 9 August 2017. I’d had an agreeable lunch with my wife and two sons, aged eight and five, before they headed for a matinee at the open air theatre nearby. (Amazingly, it did not rain.) On my way back to the office I thought I’d call in at B&Q to pick up some paint I’d promised to buy to enhance the appearance of our summerhouse. I also added four bags of potting compost to the legendarily unmanoeuvrable flatbed trolley and headed towards the checkout, where I was intercepted by a solicitous, orange-clad matron with the words:

“Are you all right, dear? Would you like someone to help you with that?”

Never before in many years of shopping at B&Q have I ever known more than one or two tills to be open, and have often wondered why they installed the other four in the first place. So this was a genuine first.

“Have you got one of our cards, dear?”

“Yes I am, as it happens. But I haven’t got anything on me to prove it.”

“Oh, you don’t need to worry about that, dear. I can see you are. Only it’s 10% off on Wednesdays for our Diamond Club members.” 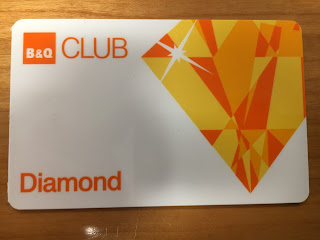 So there I stood, with £80 worth of goods on my trolley, and a straight choice to make between my self-respect and a saving of eight quid (which actually proved to be only six quid, because the compost had already been discounted).

Naturally I went for the six quid, but still returned to the office feeling far, far older than I had been when I set out, and contemplating a future in which “a nice cup of tea and a sit down” will feature extensively, along with pensioners’ specials at lunchtime, whist drives in the day room, and lively discussions about the deaths column in the local paper.

To be fair, the ticket office staff at Newcastle Central station regularly asked me “Have you got a card, pet?” when I was still in my 40s, after the stress caused by my demanding clients turned my hair grey somewhat prematurely. But back then I could always kid myself that they had mistaken me for a student.

Now there can be no doubt. I am a Diamond Club member, my foot is poised on the edge of the grave and the ground feels distinctly slippery. But at least I’ve got Wednesdays sorted for my few remaining months, and I’ll be able to put the savings on home improvement products towards my funeral expenses.

Everyone to whom I have retailed this story in my search for sympathy has laughed at me, just as I laughed at my father half a century ago. So I have also finally learned the true meaning of karma. And all thanks to B&Q.

Had unfortunately lost touch with your entertaining commentary.....glad to have popped back in to read this. Thanks for the much needed laugh....as I’m just a tad ahead age wise.