Yesterday Mrs H took the boys to the traditional Christingle service in our parish church, then on to see Chitty Chitty Bang Bang at the Lowry in Manchester, while I lay on the sitting room sofa attempting to pull myself together from the total exhaustion that has afflicted me since Friday.

Luckily a friend of our older son was able to use the theatre ticket I had bought for myself.

The boys having made donations to the Children’s Society during the church service (which is to say, having handed over the candle-shaped cardboard collecting boxes that Mummy had filled for them), Mrs H attempted to interest them in another good deed: buying extra Christmas presents for needy children.

“Will that be with our money?” Charlie, the elder, asked suspiciously.

“No, Mummy will pay for them.”

“But why do we need to buy presents for other people?”

“Well, because these are for children who might otherwise have nothing at all on Christmas Day. How would you feel, Jamie, if you came down on Christmas morning, and Santa hadn’t left you anything?”

Jamie, aged four, had no doubts about that.

“I’d ring the police and have Santa arrested,” he replied. 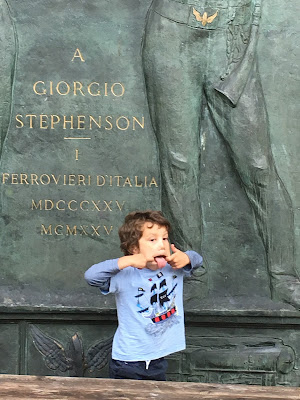 Continuing a robust turn of phrase for which he has become noted in the Hann family. Indeed, we can recall only one recent concession.

Jamie has a particular aversion to having his hair washed and, subsequent to that, receiving the attentions of a nit comb. (Head lice, a phenomenon completely unknown to me and my childhood friends in 1950s Newcastle, are now commonplace even among the denizens of overwhelmingly middle class church schools in Cheshire; which seems odd given the vast improvement in standards of personal hygiene over the intervening half century).

In the course of these regular bathroom battles, a certain amount of personal abuse tends to be directed at Mummy.

During one of these recently, Mrs H provided a summary: “Yes, I know, I am the worst, unkindest, most cruel and evil Mummy that ever lived.”

Jamie looked at her coldly and replied: “I never said you were evil.”