Pining for the truant catcher

The rural local authorities of Cheshire, in an act of collective madness, decided that this week would be their school half term. A week after everyone else’s. Which was no doubt good news for those teachers and parents looking to secure cut-price tickets to jet off to somewhere slightly warmer than the UK. But it was decidedly bad news for those of us who had elected to stay here, given that pretty much all the preserved railways, castles, country houses, petting farms and other child-friendly tourist attractions that had been enthusiastically touting for business all last week put up their shutters and closed for the winter at dusk on Sunday.

This left us with two main options to keep our little darlings entertained during our holiday break in Northumberland: pub lunches and healthy walks. A key objective of the latter being to tire them out in the hope that they might sleep slightly later than their traditional 6am BST (or, as it became yesterday, 5am GMT).

Today we went to an establishment in Newton-by-the-Sea that bills itself as a “gastropub”, something I have always found more than a little off-putting. Many years ago I observed from the top deck of my bus to and from school the opening of a modest little shop by the Cradlewell in Jesmond that billed itself as a “high class tailor”. Even as a schoolboy, I harboured grave doubts about that business. Would an establishment that really was “high class” need to proclaim the fact on its fascia? I was very surprised when, years later, a friend from a more prosperous family than mine told me that his father had all his suits made there, and it was actually pretty good.

The “gastropub” had its pretensions quite effectively deflated by my friend The Secret Diner (food critic of The Journal in Newcastle) more than a year ago.  At the time I thought he was being frightfully unfair as I only ever ordered the fish and chips or seafood chowder, both of which were ace. I also appreciated the reliably prompt and efficient service, which becomes of critical importance when one is in charge of two small human beings who will become “hangry” if their needs are not satisfied at high speed.

Considerable disappointment thus ensued when the pub proved to have seriously downgraded both its signature dishes, and I ended up paying £16.95 for an absurd (and dangerously hot) “bin lid” thinly smeared with a “chowder” in which the main ingredients appeared to be flour and undercooked, sliced potatoes. 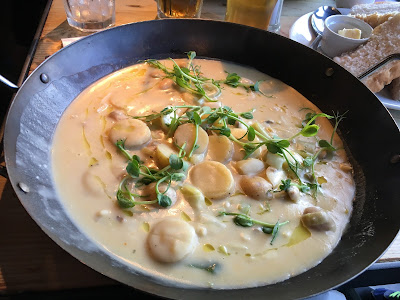 Perhaps it wise, in the circumstances, that the staff had also developed new skills in the avoidance of eye contact.

Still, no one has yet managed to spoil the beach at Low Newton and we spent a pleasant and surprisingly clement afternoon watching the children running around and getting as much of the North Sea as possible inside their wellies. 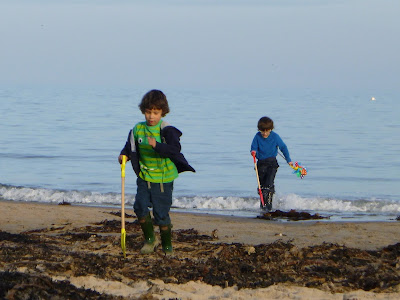 Though it was a little disappointing that we did not receive a visit from the uniformed individual who featured with such regularity in the comics of my childhood: the Truant Catcher. I could, of course, have patiently explained that my children were enjoying a legitimate holiday, in much the same way as I explain nearly every day that I am not, in fact, their grandfather. On the other hand if he had come all that way with a big net and a van with barred windows, it might have been cruel to deprive them of an educational experience of unjustified incarceration.

Tonight, for the first time in my life, I carved a pumpkin lantern. It took about ten minutes, compared with the couple of evenings I used to spend attacking a turnip (as we call swedes on Tyneside) with a blunt kitchen knife 50-odd years ago. We lit the candle and awaited callers, having armed ourselves with a couple of bags of fun-size chocolate bars from Iceland in Alnwick. 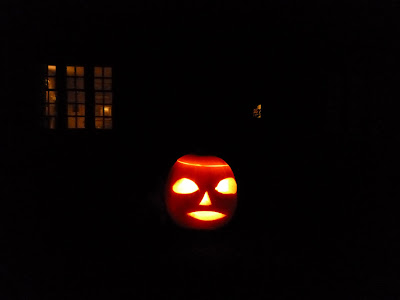 Unsurprisingly, in the middle of nowhere in rural Northumberland, absolutely no one came.