You could not make it up

I have not seen my car for more than two weeks now. Unfortunately it hasn’t been stolen. It has been towed away for repair by the geniuses at Land Rover, whose technician pitched up at my house in the wilds of Northumberland on Saturday, 21 September, plugged in his little computer and immediately identified two faults: one relating to fuel pressure and the other suggesting a faulty sensor on the crankshaft. It was this, he thought, that was sending messages to try and stall the engine. Occasionally it was succeeding in doing so, which is why I had spent the previous fortnight lurching and jerking around the roads of northern England, and periodically gliding to a halt. Never a pleasant experience if one happens to be cruising in the fast lane of a motorway at the time. 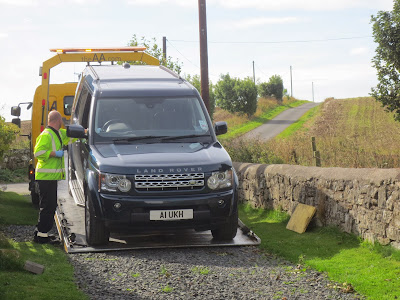 On the one hand I was pretty furious with Hunters Land Rover of Chester for having failed to diagnose and fix these faults when I took the vehicle in for repair the previous Tuesday. All the more so because they had not only permitted me to drive away in a clearly unsafe car, but had now caused me to waste pretty much an entire Saturday, and to miss the friends’ wedding that was my sole reason for making the 240 mile drive to the North East in the first place. But, on the other hand, I was relieved that someone had finally agreed with me that there was a problem, and that steps were going to be taken to put it right. I was also glad to have my car temporarily replaced with one that actually worked, though Land Rover’s insistence on providing me with an identical Discovery 4 was probably misplaced, as by that stage I would have felt more comfortable behind the wheel of almost any other vehicle, with the possible exception of a steamroller.

So time wore on. I had a vague idea where my car had ended up when the AA man towed it away, because someone from Land Rover had rung me up to say that they couldn’t take it to my nearest dealer, Stratstone in Newcastle, because they were “too busy”. So, if it was all right with me, they were going to dump it outside a closed Land Rover service centre on the Team Valley Trading Estate in Gateshead, and post its keys through the letter box. I explained in no uncertain terms why this did not strike me as a great idea, and they rang back with a Plan C: delivering it to Stratstone in Houghton-le-Spring, wherever that is. I concurred.

There followed several days of silence, so I thought perhaps I should ring Land Rover and check on progress. But they could not help; they had no record of where my car had been taken, and I would need to ring the dealer direct if I wanted to know more. In the circumstances, it was quite handy that I at least knew where it was supposed to be.

So I Googled [remember other search engines are available] Stratstone in Houghton-le-Spring and spoke to a nice man called Paul who explained that Land Rover had only just authorised him to replace the vehicle’s high pressure fuel pump: a part which needed to be specially ordered and which would be a major job to fit. He promised to keep me updated and was as good as his word: he rang a couple of days later to report that the work had been done and to ask my permission for one of his colleagues, who lived a good 25 miles away, to take the vehicle home with him to give it a proper test run and ensure that this had fixed my problem.

I was delighted, and noted the contrast with his Chester counterparts, who when asked if they had taken the vehicle for a test drive before pronouncing that they “couldn’t find a fault” assured me that they had. And I might have believed them but for the fact that I noted my car’s mileage on delivery to them as 31,999, and on collection as 32,000.

A few more days drifted by, and on Thursday Paul rang me again and asked me to call him back. I tried to do so, but found myself in the midst of an almost unbelievably strict interrogation about why I was ringing.

“Is your car in the garage?”

“But is your car in for repair?”

“It was. I don’t know whether it still is. I imagine that’s why Paul rang me.”

“What exactly was the nature of the problem with your car?”

“Look, I don’t want to be rude, but exactly what part of ‘He rang me and asked me to call him back’ are you struggling to understand?”

On Friday afternoon Paul rang again, during the 15 minutes while I was away from my desk having lunch, and left another message asking me to call him back. In the circumstances I asked Mrs H, who has infinitely greater reserves of patience than I do, to try and ring Paul for me and just leave a message asking him to call me again. Mrs H always suspects that I exaggerate grossly, so it was a relief to me when she confirmed that the process of getting through was every bit as difficult as I had described. Apparently the dealership uses a call centre that is incentivised according to the number of service appointments they book, hence the relentless focus on interrogating callers’ motives rather than on anything that might pass, in a sane world, for customer service. The man Mrs H spoke to admitted that even members of his own team who were out on the road could not get through to colleagues back at base except through resort to stratagems like claiming “I’m his boyfriend and it’s an urgent personal matter.”

Eventually Paul rang me again and told me how lucky it was that I had permitted his colleague to take my car for a decent test drive, because it had broken down en route. And the problem lay in the faulty crankshaft sensor that had been highlighted by the computer two weeks ago, but which Land Rover had told him not to bother replacing because it was a false result that would be cured by renewing the high pressure fuel pump. The good news was that they had now belatedly agreed that the sensor should be replaced, too. The bad news was that what would have been a 15 minute job while they were replacing the fuel pump would now be the best part of a day’s work as they took the car to bits again to put it right.

All of which tends to confirm my suspicion that Paul and Stratstone Houghton-le-Spring are rare good guys in an organisation where total idiocy seems to be the norm. I don’t actually care too much about how long my car is away. I wouldn’t mind if I never saw it again and I shall certainly be saying a cheery Tata to Land Rover as soon as it is practically and financially possible for me to do so.

I can only assume that the likes of David Cameron and Ed Miliband, who seemed to be competing during the conference season to heap praise on Jaguar Land Rover as the epitome of British (Indian-owned) industrial excellence, have never actually forked out any of their own cash to buy one of its shit awful products. But then you would expect politicians to be dim and disingenuous. What surprises me rather more is the attitude of the thieving community.

One of the incidental annoyances of the last few weeks has been the repeated phone calls from Cobra vehicle tracking whenever my car has had its battery disconnected or been loaded on a trailer. I had one of their trackers installed at the insistence of my insurance company because it was their standard requirement for all vehicles valued at more than £50,000. The other day I pointed out that this could only have been the case for about ten minutes after delivery, before depreciation kicked in, and it must be worth vastly less than that now.

Their answer was that I must keep the tracker because my car is still a high theft risk and very attractive to the vehicle stealing community. Well, all I can say is that they have no discernment whatsoever. So here is my advice to the criminals of Britain: think German or Japanese, boys. After all, if you need to make a quick getaway from the police, it will help to be behind the wheel of something that won’t come shuddering to a halt when you put your foot down.

So familiar! I remember starting one of your Range Rovers and finding about a pint of rainwater gushing out of the steering column...Brilliant cars, eh? And as I recall, that took three weeks to sort out.