A fox not holding its Mummy's hand

16st 2lb, 3.9 units. I started writing this blog again in February, with the aim of providing a vivid “real time” account of the scheduled arrival of my second son. But then said arrival, combined with my principal client signing a £1.5 billion management buyout deal the day after he was born, meant that I did not have time to write a single word.

Though I did, at least, manage to scribble a newspaper column setting out the essential facts of his arrival. On Valentine’s Day. As planned. A choice which I can recommend to any lady who hopes for the undivided attention of her hospital’s obstetrics team, because it is certainly not a date on which she is likely to face a lot of competition for an elective Caesarean slot. Given that it opens up a vista of many years in which 14 February will be associated with kiddies’ birthday parties and unseemly rows over the contents of party bags, rather than romantic candlelit dinners à deux. I must say that getting out of ever buying another Valentine’s Day dinner struck me as one of the major advantages of the arrangement. People kept telling me that there was no reason why I shouldn’t still go out for that after the birthday party was over but trust me: at my age I won’t have the energy.

Anyway, Jamie (a.k.a. The Baby) arrived at 10.44 a.m. on 14 February, and I am happy to report that it was an entirely painless experience. Well, apart from the humiliation of having to get togged up in ludicrous surgical “scrubs”. 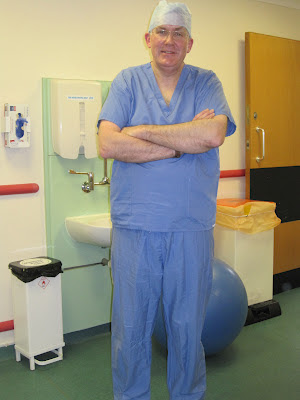 Though given a straight choice, I would definitely go for that over Mrs H’s role of having her stomach doused in idione and then cut open by a group of bantering medics in what looked like the store room of a DIY shop, only with rather better lighting. I realised that the bloke in charge was a man after my own heart when he cheerily asked her “Any last requests?” when completing the paperwork before the surgery. Though being the bloke in charge he naturally wasn’t actually present during the operation, leaving that to his subordinates. Who, it is only fair to say, made a perfectly decent fist of it apart from the moment when a trainee made such a hash of putting a line into Mrs H’s arm that blood spurted all over the floor, prompting the anaesthetist to suggest that the lad might like to think about heading back home to New Zealand.

My initial reaction to The Baby was that he looked much more like his mother than The Boy does. She thought he looked exactly like me. I only worked out who he really looks like when I got home and started flicking through my iPhoto folder, and spotted that it is almost impossible to tell the difference between The Baby and his elder brother at that stage of his life.


Given that The Boy seems to be universally regarded as a very handsome little chap, this can only be regarded as a promising outcome.

Mrs H was back at home in time for her own birthday three days after The Baby’s (what with that, Valentine’s Day and our wedding anniversary, February, despite its relative brevity, is sure to prove disproportionately expensive for the rest of my life). And then settled into a routine of breastfeeding that seems to occupy the bulk of her time. Much to the occasional annoyance of The Boy, who alternates between affectionately cuddling his younger brother and attempting to “squish” him, or “accidentally” knocking over the Moses basket with the baby inside.


A fortnight’s “holiday” in Northumberland over Easter provided an opportunity to bond with my second son, as well as a further excuse for not blogging. The weather was epically awful, as one might expect of Easter in England, but we still managed to get out for a number of walks, with The Baby in a sling. Number One Son demonstrated his impressive development as a barrack room lawyer by repeatedly refusing to hold hands with an adult while walking down the road, stating pedantically “I’m not walking on the road, I’m walking on the grass.”


Months ago, Mrs H managed to whip him into line by drawing his attention to the crushed remains of a fox by the side of the road, and pointing out that this had happened because the fox hadn’t been holding its Mummy’s hand, and had got squished as a result.

This lesson seemed to be well absorbed at the time. Then the other night a little voice piped up from the back of the car, “Mummy, let’s find a fox that isn’t holding its Mummy’s hand, and then squish it.”

Mrs H pointed out that that wouldn’t be a very nice thing to do, and received the rejoinder, “No, Mummy. It will be fun.”

We are consoling ourselves with the thought that he does not understand the concept of death, yet. Given that he is obsessed with tractors, agricultural machinery and animals, some sort of career in farming seemed to beckon, but now perhaps we should add Master of Foxhounds to the list of possibilities. It does not look exactly like a growth industry, but at his age I wanted to be the driver of a main line steam locomotive or a trolleybus, and I am prepared to bet that MFHs will be around for rather longer than either of those proved to be.

Congratulations on another future Novo.

Delighted to see No.1 Son has proper attitude towards vermin. Looking forward to when he is big enough to drive our 7.5 tonne Case digger (suitable for 7+years in my estimation). In the meantime, have you seen these - gorgeous for a boy shaping up for a life of Archers listening http://www.brushwoodtoys.co.uk/toyfarmbuildings.asp