Whatever happened to Farmer Palmer's llamas?

No idea (of my weight this morning, that is), 6.0 units. For many years one of the incidental pleasures of going to the opera at Glyndebourne has been driving through the pretty village of Glynde and admiring the fields full of alpacas between there and the opera house. I know that they were alpacas, because there was a hanging sign at Glyndebourne Farm proclaiming them to be just that. But in the interests of euphony, I preferred to believe that they were llamas, owned by the legendary Farmer Palmer (“Git orff my laaaaand”) created by Viz comic.

“Would you like to see Farmer Palmer’s llama farm?” I would say to guests as I drove them to the opera, and they always went down well – rather better, in fact, than some of the more avant garde productions at the opera house.

I am sure they were there when we last passed this way. And I have a strong idea that I also spotted a camel lurking in a field by the farmhouse. Maybe that was the Trojan horse that caused the whole thing to unravel. [Pub quiz question: how many other English verbs can you create by sticking “un” in front of the name of an opera composer?]

Because we drove that way this afternoon and there were no alpacas to be seen. The hanging sign was gone, too. I felt sad, even though I am equally sure that I resented the animals as an alien intrusion when they first appeared, muttering about what was wrong with traditional South Downs sheep. I just don’t like change, that’s the top and bottom of it. Unless it is being handed to me by a shopkeeper after a purchase.

On that basis this afternoon’s performance was a top choice: Britten’s Turn of the Screw, in a production that I first saw in 2007. I know this because it says so in my diary. Moreover, one of the guests who accepted my invitation to come along today also saw it with me then, and can vouch for the fact that I was there. Which is handy, because I only booked it this time because I had completely forgotten ever having seen it before. No recollection whatsoever. My diary says that I also went to La Cenerentola the previous evening in 2007, and I have photographs demonstrating that I was indeed in the grounds of Glyndebourne with friends that day, yet I have absolutely no recollection of that production, either.

Operatic amnesia: it is a new one on me.

And odd because the production and the performance were both absolutely terrific, and are now seared on my memory for the long term (if, at my age, there is any long term to be had).

We had an excellent picnic, too, kindly contributed by my guests, and despite the mugginess of the early afternoon and the apparent threat of thunder, it proved to be a magically perfect English summer’s evening. 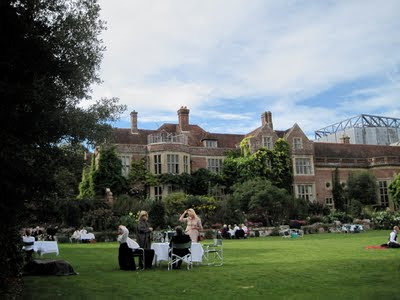 Even down to a very pretty girl with long blonde hair dancing round the lawn in what I feel compelled to describe as a long white shift. She was doing it as we arrived, right next to where our friends had planted their picnic chairs and rug. Mrs H expressed some doubts about the wisdom of approaching the lunatic. I preferred to think of it as some sort of lawn theatre – perhaps, with any luck, an advertising initiative by Peter Stringfellow. Our companions felt that it was intended to put us in the mood for The Turn of the Screw by making us think of the orphan Flora. I could say what it put me in mind of, but I don’t think it would get past the traditional vetting of this blog by Mrs H.

I wonder whether we will ever come here again? It won’t be easy logistically in summer 2012, with a three-year-old and a new baby to look after. It may not be easy financially, either. I suppose I should just count myself fortunate to have spent so many truly memorable evenings here over the last 27 years, plus a few that I cannot remember at all. And congratulate myself for having the presence of mind to add my name to the waiting list for membership of the Glyndebourne Festival Society within minutes of walking into the place for the first time in 1984.

Seems you are probably right.