The surreal week of Rothbury, Moaty and Gazza

15st 4lb, 4.0 units. What a week for the Bloke not to be in the North, when Rothbury (the nearest shopping centre to my house, home to my doctor, bank and favourite hardware store) became the centre of global media attention as Raoul Moat led Northumbria Police a merry dance through the surrounding woods and fields, while he himself strolled cheerily up and down the main street in his nondescript orange T-shirt and Mohican hairdo, occasionally breaking into houses to obtain sustenance. 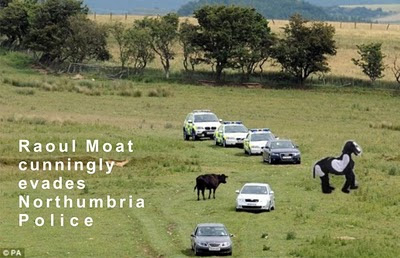 Umpteen reports suggested that the police had missed several excellent opportunities to capture him – for example when they failed to keep under surveillance the house of the friend where he had called to leave a letter, thereby allowing him to return unobserved to leave another one; or when they chose to ignore the prediction of his Rothbury-based former girlfriend that he would be turning up there; or took a couple of hours to respond to the report that his distinctive car had been spotted; or refused to enter one of the houses he had broken into. But then you only had to watch one of the police’s regular press conferences to realize that Northumbria’s force was not necessarily led by the sharpest knives in the proverbial box. I thought originally that the Acting [sic] Chief Constable was a Brighton drag queen, and was glad to be corrected by the friend who pointed out that she was in fact Alice, the mad verger from The Vicar of Dibley.

A colleague swore that he had watched rolling TV coverage of one of the many police roadblocks which featured a fat man in a yellow high visibility jacket cheerily smoking a fag and chatting to a mate while he waved through a Transit van. At which point the friend drew his attention to the presence of the Sky TV camera, galvanizing Plod into action to stop the next car, a VW Polo, and conduct a thorough search, even making the female driver remove its spare wheel in case Moat was hiding beneath it.

All in all, a first rate farce which finally entered the realms of the surreal when Gazza turned up last night with his bread, chicken, can of lager, fishing rod and dressing gown to sit down and talk to his old pal Moaty and resolve the situation peacefully. The police might as well have let him try. He couldn’t have made a bigger arse of the job than they did, could he? 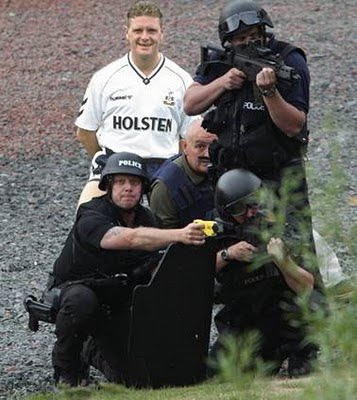