The camel diddler with the exploding suppository

15st 5lb, 4.5 units. It has not been a great Christmas from the point of view of weight control. Making allowance for the 4lb discount allowed by the scales I brought with me to Cheshire, compared with those I left behind in Northumberland, I have regained all but a few ounces of the weight I painfully lost during 2008. My successful diet was chiefly inspired by the embarrassing and revolting heights of obesity I had attained by the end of my Christmas lunch in 2007, and assisted by a conveniently motivational wager with another newspaper columnist that I could not lose 21lb by the following Easter. To look on the bright side for once, there do seem to be some lasting health benefits even when one regains the weight, or at any rate a time lapse before the disbenefits kick in. At any rate, when they were last checked, my blood pressure and cholesterol levels were still in the reasonably benign ranges to which they retreated when I was the best part of two stone lighter than I am now.

My Number One task for 2010 must be attempting to get back there. That and writing some stuff that people are actually willing to pay to read.

I expect that losing the weight will prove to be the easy part.

Avoirdupois apart, it has not been too bad a Christmas. My usual seasonal illness (a truly stinking cold) did not kick in until Boxing Day, and my lovely wife gave me the second best present I have ever received: a digital radio that not only sounds superb when listening to my usual BBC stations live, but also enables me to access their “Listen Again” slots on the Internet and even streams the music stored on my computer. Magic.

The best present I have ever received (how’s that for crawling, Baby?) did considerably better than me on the present front, though unfortunately he’s still at an age when he is far more interested in playing with the wrapping paper than with its contents. And what a lot of wrapping paper there was. It has taken us three days to clear the sitting room and fill the recycling bin with it, and we are left with a house that looks like a branch of Toys ‘R’ Us after an algorithm failure has led to a catastrophic breakdown in stock control. 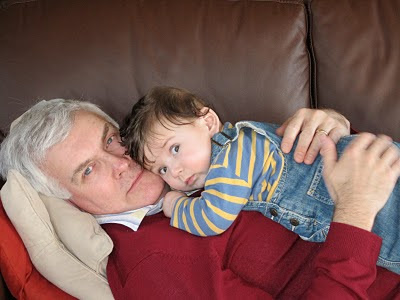 My best present (but apparently for life, not just for Christmas)
I am struck not only by how many more toys The Baby has accumulated in six months than I did in my first 16 years or so, but also by how all of them seem to emit some sort of loud noise. When I was a child, so long as some ill-intentioned uncle did not give your brat a toy drum, you were in the clear. Now everything sounds off with maddeningly cheery and inevitably American “educational” voices, or the squawking of rain forest birds that will almost certainly be extinct by the time he leaves kindergarten, or the revving of engines and tooting of horns. I am seriously concerned that The Baby may grow up to be Jeremy Clarkson. 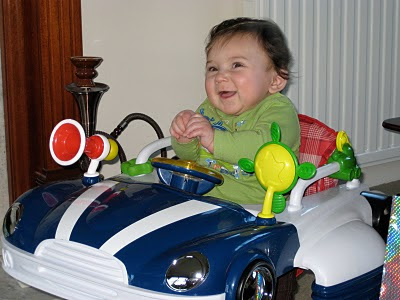 Young Clarkson shows off (hands off wheel)
The Dog is profoundly jealous of all this, and cannot understand why his willingness to allow The Baby to play with all his toys is not reciprocated. 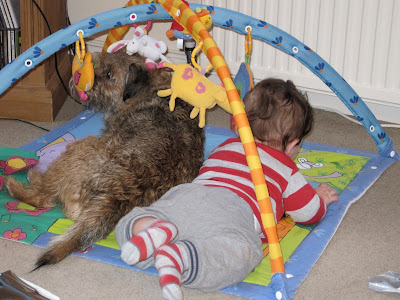 Baby gym or dog gym? Views in our house differ
I am torn between sending a slightly acid note to The Baby’s one godparent who did not send him so much as a card, and thanking God for small mercies. We surely do not need to buy him anything else for his instruction or entertainment before he goes to school. Well, apart obviously from the huge train set that will be designed for my enjoyment rather than his.

I spent this morning struggling in the face of feeling thoroughly lousy to write a newspaper column on the theme of history versus clairvoyancy. I can vouch for the comparative easiness of history because my whole life has been driven by my phenomenal laziness, and I spent my school career eagerly dropping the classes I found difficult. Swimming, gym, rugby, maths, physics, classics and modern languages: one by one they fell happily by the wayside until I was left with just history. In those days I had a prodigious memory for facts and figures, and could write English after a fashion, so found it easy to excel in those traditional three hour exams, writing essays on such demanding subjects as “Gladstone was as nutty as a fruitcake: discuss.”

The ability to apply a sceptical eye to the available evidence and dash off a few hundred words of analysis has kept me in food, heat, light and (crucially) drink ever since, so I am unconvinced that it would have been to the benefit of society if I had been fast-tracked through a two year “vocational” degree in, say, public relations, rather than hanging around in bars at one of our ancient seats of learning, pretending to study history. Though it would, to be fair, have saved quite a bit of public money.

Anyway, what I started trying to explore was why the people who write obsessively about the evils of European integration and the implausibility of manmade climate change are one and the same. It’s easy enough to answer, in that both the Europe and Global Warming industries are dedicated to clamping down on individual freedom in the name of the greater good. But while one can base a solid case against Europe on history alone, to demolish the arguments for manmade climate change also requires an element of clairvoyancy. Unless one is simply prepared to rely on the long history of so-called scientists getting it wrong and changing their minds through all the previous “end of the world” scares of the last half century or so.

But then I got distracted by the Detroit underpants bomber (boxers or Y-fronts?) and what must surely be the next stage in the War Of (rather than On) Terror. I excised the word “pessary” from my draft on the grounds that it was likely to cause revulsion at the breakfast table, and decided to refer to “ingested” explosives instead. No sooner had I sent it off than I got an informative e-mail back from my editor pointing out that “you ought to know that a week or 10 days ago, a Saudi security minister narrowly escaped injury in a bomb blast set off by a man who had crossed from the Yemen to carry out the murder and had the explosives secreted in his rectum (he used the very same explosives, as it happens, that the Detroit loon had in the bottle strapped to his leg). Your future has arrived, then!”

Oh joy! Bring on the Brave New World of looking over our shoulders for sinister camel diddlers adopting that slightly unnatural shuffle associated with exploding Anusol. I’d have thought that the need to institute searches for those at security might take some of the simple joy of jetting off for the weekend with EasyJet or RyanAir, but maybe we will get used to it. Who knows, we might even find that we enjoy it.