The Big Book of Breasts

No idea of my weight, which is probably just as well; 6.0 units of alcohol yesterday evening; 1,222 days to go; South Yorkshire.

Two nice things happened after yesterday’s depressing crossing of my path with those of the local trainee scratters. First, the LTCB’s friend, who had taken some pictures of the dog ten days ago, and swore that he looked exactly like a Steiff teddy bear, finally got around to sending them to me. She has a point, don’t you think? 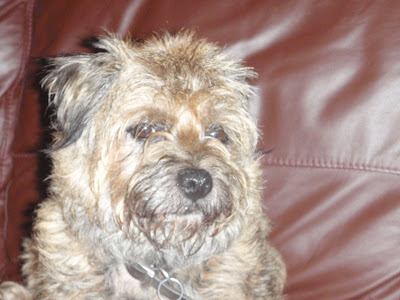 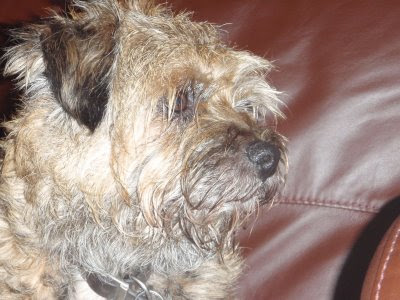 ... but admittedly probably less use as burglar deterrent
Secondly, the LTCB insisted on taking me “somewhere nice” on my last evening in Chester. She did not go so far as to insist on paying when we left it, but I have long been informed that it is the thought that counts. Her choice was a restaurant in Chester’s interpretation of the Belgian tradition, specializing in moules and frites. The food was good and the service splendidly attentive and enthusiastic. I felt that I had had a really cracking time right up to the moment when I woke at 4.30 a.m. with the most agonizing indigestion I can remember. Perhaps it had something to do with choosing a cream-based sauce with my mussels, followed by hot chocolate topped with about a quarter of a pint of solid whipped cream. Or perhaps it was just a well-deserved consequence of eating far too much, full stop.

I duly felt absolutely terrible when I got up at 6, and when I set off in the general direction of home at 7.45. I had allowed 2hrs 15mins for the first stage, a drive to Doncaster which my sat nav reckoned should take half an hour less than that. But the LTCB had advised me that I actually needed to leave at 7.30, to allow for rush hour congestion, and I duly arrived for my meeting precisely 15 minutes late. Could there be anything more annoying than having to admit that?

My sat nav kept coming up with recommendations to avoid the jams, but they seemed so eccentric (e.g. “head south on the M6”) that I decided to ignore them. Shortly after I had stopped at a service area on the M62 to answer a pressing call of nature and to advise my client that I would be late, the sat nav instructed me to take the M606 exit to Bradford, which seemed a bit peculiar, but I was not entirely sure of the best route to my destination so I complied. It then immediately instructed me to rejoin the M62, on which I had been heading eastwards in the first place. This seemed so utterly barmy that I drove all the way round the roundabout beneath the motorway a couple of times, waiting for the machine to come to a more rational conclusion, but it did not. I think it must have been taking revenge on me for ignoring it earlier. At least I finally grasped why it is equipped with a female speaking voice.

I greatly enjoyed her discomfiture a little later when we joined a new stretch of the A1 motorway which she did not know about, and the little red arrow on the screen showed me advancing boldly across ploughed fields at 70mph, or thereabouts.

I had a surprisingly productive meeting with my client and left clutching assorted loot including Sotheby’s three volume catalogue for Damien Hirst’s “Beautiful Inside My Head Forever” £111 million money-making extravaganza, and a huge, shrink-wrapped coffee table volume entitled The Big Book of Breasts, which my client seemed to think I might find of interest. I duly placed it on the coffee table when I got home, but it looked like buckling under the weight so I moved it to the sturdier table in the dining room. I think I shall wait for a special occasion before opening the shrink wrap, treating it like one of those emergency hammers they keep behind glass on the trains for smashing the carriage windows when it overturns. (Although I have never spotted it, there is presumably supposed to be an even smaller hammer somewhere, like the delicate ones they used to give away with trays of Harrogate toffee, to be used to break the glass to release the real emergency hammer).

But until I screw things up (which surely cannot be far off, since it is what I always do) why would I need to look at glossy pictures of breasts when the Less Tall Cheshire Brunette is so happily endowed that even my most obviously gay friend was moved to deliver a pithy quote on her perfectly proportioned chest shortly after I had introduced him to her?